Lately I have been imagining a post-scarcity friction-free creative economy.

Music, film, and publishing industries are thrashing around trying to readjust to their post-scarcity reality. Object design will be next to be “post-scarce” with the rise of 3D printers. How can we design a creative economy that better matches reality? Couldn’t we design a system that is more like the internet, and less about censorship and control?

If financial transactions were friction-free (no fees or percentages, like Dwolla transactions <$10), then a creative work could specify percentages of tips to other parties. If you tip an band, then they could split that tip among label and members as they see fit. Those credit links would be the opposite of paid links (rel="nofollow"), they would be paying credits (rel=credit(10%) ?). 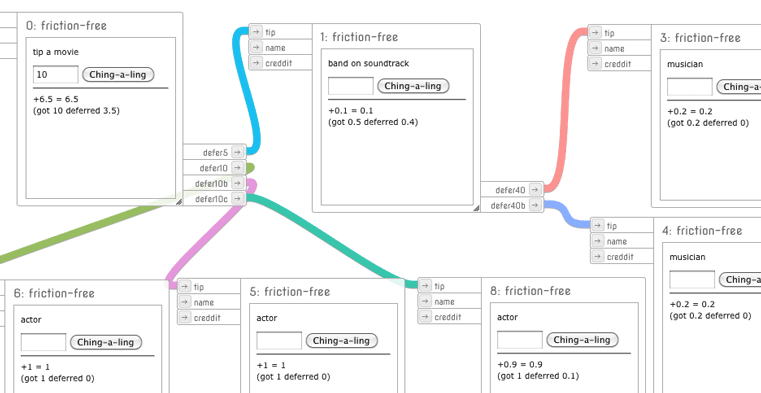 If you could tip a filmmaker as easily as a Facebook “like” or Flattr, and they could defer part of that tip to the musician from whom they used a CC-licensed track, wouldn’t that be a good way to provide value to a Creative Commons economic system?

Now, if you Flattr a blog post that embeds a video, the blog owner gets the full value of the Flattr. If they could defer 99% of the Flattr to the film, then the filmmaker would be encouraged to CC-license their stuff so that it could be shown by any venue interested. The venue could be a bike-powered back-alley film festival and it could work the same way.

What if the blog owner is greedy and only defers 5% of the tip to the movie? The amount of the credit should be clearly displayed with the tip widget, along with the breakdown of how your tip will be distributed. The tipper could then decide to just click through to the movie page to tip it directly.

Of course, it should be distributed, not tied to just Flattr or Dwolla. Maybe “friction-free creative economy” certification and logo for services are in order.

I was imagining a Meemoo App Store, but thought that people might be adverse to others profiting off of their open-source modules. If this were to slow the amount of module building and sharing, it would undermine the point of the project.

A deferred-tip system which defers credit from an app’s tips to the modules it uses would be an interesting experiment. You could also provide credit when forking a module. Would this encourage open-source collaboration or get in the way?