FBP and NoFlo - another hacker's perspective

Meemoo has joined forces with another open-source JavaScript dataflow project called NoFlo. We launched an ambitious Kickstarter campaign which has gotten a lot of positive reaction and is closing in on the goal. Of course, as with any idea around coding, the trolls also come out.

Looking at the FastCo comments and the Hacker News thread, it seems like all critique is focused on the choice of one word in the introduction. Can we move beyond that and talk about actual ideas?

I have used Quartz Composer and Pure Data, but most of my coding was in Flash and JS. Then I started Meemoo to bridge those paradigms and experiment with hackable media. Now I’m working on NoFlo to bring the concept closer to JS for more general programming. I’m looking forward to building Meemoo components with NoFlo, making my code even more encapsulated and reusable.

My biggest issue with QC and PD is that I often wanted to dive into a component and change something. In QC this meant finding the source (if open) and figuring out Objective-C, XCode, compiling… too much friction. We are putting a lot of design into making a useful tool for coders. We’ll be able to edit a component’s JS or make a new component in-place, in a live graph, without changing windows and taking us out of our own coding flow. 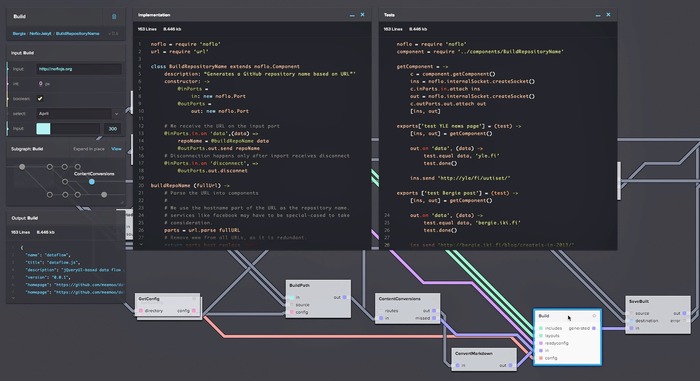 So FBP hasn’t been suppressed, and is currently only used in niche industries. The truth is that it hasn’t been tried for general purpose JS, which spans server, interactive UI, canvas, WebGL, Web Audio, and all future niches that JS finds. We’re inviting our early community to help us design the patterns that make sense in those contexts. The beauty of the JS ecosystem is that it will be seamless to connect them.

So FBP isn’t a silver bullet that will make everybody magically understand code. But when I discovered Quartz Composer, my concept of what is possible with code was greatly expanded. My hope is that Meemoo and NoFlo will have that effect on future media hackers.